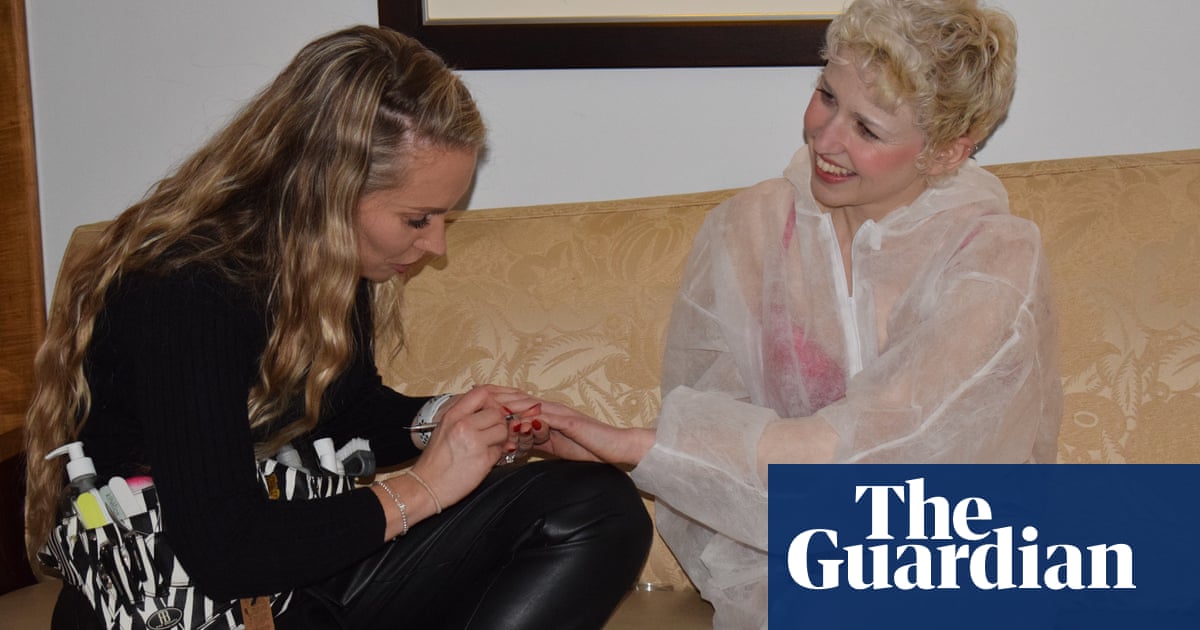 It’s Friday night and I’m standing in the basement of the Savoy hotel, surrounded by more than 50 people in wire antlers and candyfloss pink recycled wigs. It’s just a few minutes before Vin and Omi’s show is due to start, when the small wooden door in front of us will open on to the famous mirrored ballroom – the same one where Christian Dior held his first UK show. I don’t feel ready for the London fashion week crowd.

So unique is Vin and Omi’s brand – sustainable fashion with an inclusive message – that I and many of the other models are in fact not models at all. Next in line to me is Paris, an elegant, honey-skinned woman, who tells me only as she’s being fitted into her latex hotpants for the show that she normally works as a mental health nurse.

But there are some professionals here too. Emma Barslund-Blackman, a 5ft 11in catwalk veteran, kindly coaches me through my first (and possibly last) ever modelling gig: “Don’t look down. And remember, if you fuck it up, it doesn’t matter. It’s just fashion.”

Unusually, these are clothes that won’t be sold. They exist purely to make an environmental statement – that the core materials used to make mass-produce clothing are damaging our planet. Looking down at the frothy babydoll dress that I’ve been fitted in, I couldn’t have guessed it’d been made from waste plastic bottles, collected during a Brighton beach clean. The way the designers have transformed them into organza-like baby blue and pink flowers that flounce as I dance down the catwalk is genuinely incredible. So too is the coat worn by the elderly gentleman to my left – its origami folds fashioned from a sail donated by Team GB sailor Hannah Mills.

Meanwhile, the Savoy’s own waste plastic bottles have been transformed into a range of boldly patterned silk-like scarves, which are knotted around models’ necks. Nettles collected from the Prince of Wales’ Highgrove estate are woven into a gothic-inspired bodycon dress, with the show’s title, Resist, running vertically down its front, in a statement of the designers’ will to combat the climate crisis. So natural is the fabric that it begins to biodegrade even as its model hits the catwalk, leaving a trail of wire-like strands behind her on the ballroom floor.

The sustainability message continues backstage, with an attempt to limit single-use plastics and make-up wipes (though I did catch sight of a few Starbucks cups lying around – caffeine consumption is at perilous levels through fashion week). Lighting, too, has been kept to a minimum, to save energy – presenting a challenge to the make-up artists who must apply our doll-like looks in near-gloom.

But of course, the designers concede, it is impossible to reconfigure something so inherently wasteful as a fashion week show, to which hundreds of guests have travelled in taxis, tubes and buses. “We’re not perfect, but the idea is that we bring the waste down as low as possible,” says Omi. They plan to partially offset the show’s carbon footprint by planting trees this summer. Once the show’s over they’ll be back to the countryside, wellies on, collecting the raw materials for next season.

From the Iowa caucuses to the Barnes and Noble fiasco, it’s clear: tech cannot save us

The Guardian We have fallen for the idea that apps and artificial intelligence can substitute judgement and hard work. They can’t Every four years, journalists from around the world are drawn to the Iowa caucuses like podcasters to a murder. The blatantly anti-democratic tradition appeals to certain journalistic biases: the steadfast belief of the political […]

The Guardian University staff who are due to start 14 days of strike action at 74 campuses across the UK have expressed their anger and frustration at what they see as employers’ failure to address their concerns over pay, pensions and working conditions. Up to 50,000 lecturers, technicians, librarians and other academic and support staff […]

The Guardian A 101-year-old Italian man who has been in London since 1966 was asked to get his parents to confirm his identity by the Home Office after he applied to stay in the country post-Brexit. In what appears to be a computer glitch the Home Office thought his he was a one-year-old child. Giovanni […]