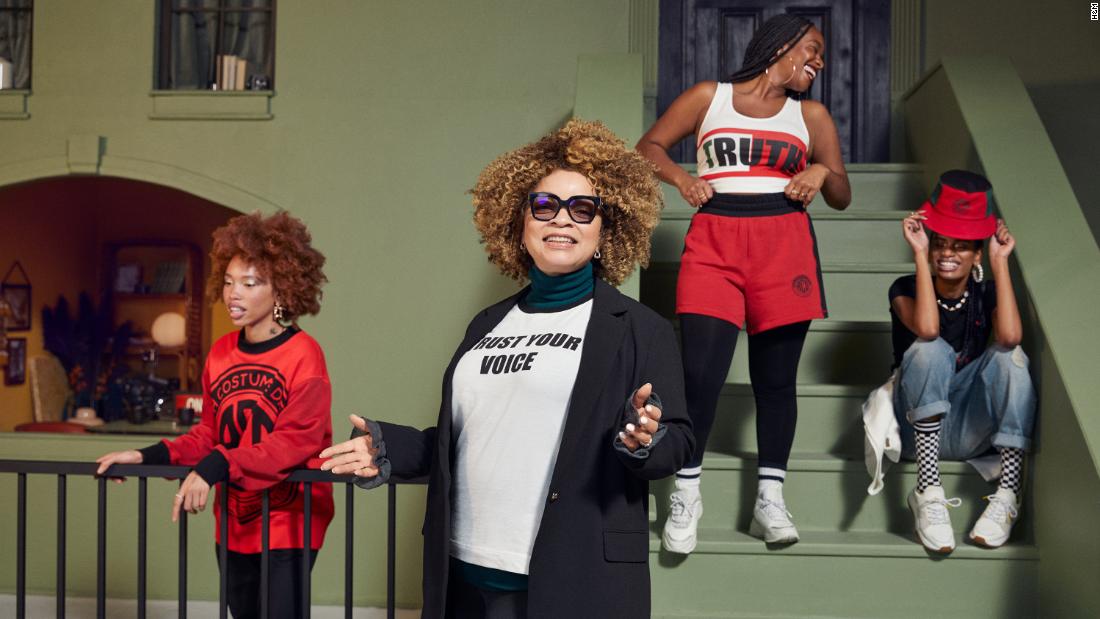 On Thursday, the creative mind behind the critically-acclaimed styles used in hit films like “Black Panther,” and “Dolemite Is My Name,” launched a new, limited-edition H&M clothing line.

is an assortment of t-shirts, sweatshirts, shorts and headgear commemorating African-American fashions of the mid-to-late 1980s and early 1990s, now known as the golden age of Hip-Hop. It was an eclectic time in black fashion history when vibrant pan-African colors, bucket hats, and apparel celebrating Malcolm X were staples in the culture.

It was also an era that Carter helped shape with her costume design work in Spike Lee films like “Do The Right Thing” in 1989 and the 1992 “Malcolm X” biopic starring Denzel Washington.

Carter says her new clothing line is a throwback to elements that inspired her early in her career. The venture is also giving her a way to connect with up and coming artists and inspire other black and brown creatives to chase their dreams.

“If someone was going to ask me if I was going to do a fashion line, my first response was no,” she told CNN Business. “But this new line tells a story. It connects everyone who has doubts or fears of themselves as they go through this journey. I hope any one of these pieces will shed a light of representation and confidence to the wearer and give them that energy that makes them feel great, like they can accomplish anything.”

H&M is one of the latest apparel companies to collaborate with a prominent black celebrity on a fashion line, but it is far from the first.

the company’s payroll — to do a collection. The announcement came shortly after the Kering-owned luxury retailer took heat for selling a

on a new line inspired by Naruto, the actor’s animé muse. Louis Vuitton made

its first-ever black designer in 2018. Its parent company, LVMH, partnered with

to create a Fenty luxury fashion line a year later.

Even athletic apparel companies are getting in on the black-collab. craze. Abloh recently unveiled his new

training line earlier this month. And

Fashion industry expert Teri Agins, author of “Hijacking the Runway: How Celebrities are Stealing the Spotlight from Fashion Designers,” says the retail clothing industry is only now beginning to appreciate the value of multiculturalism in branding after decades of ignoring black and brown people.

Working with celebrity designers rather than developing up-and-coming ones, she says, gives companies a faster return on investment.

“If I were a big corporation and I’m thinking about who I want to promote, you want someone who has some name recognition and can give some immediate payoff,” Agins told CNN Business. “Celebrity trumps everything.”

Coolest monkey in the jungle”

scandal, when the brand’s website featured a photo of a black boy wearing a sweatshirt with the eyebrow-raising message printed on the front.

The image went viral and created international outrage. There were

outside H&M stores in South Africa, where the Swedish brand and its parent company, Hennes & Mauritz, had faced

for failing to hire more black models and designers. The uproar forced H&M to temporarily close some of its stores there.

Carter admits the incident made her think twice about working with H&M when she was first approached by the company.

“I not only thought twice, I thought about it three or four times over!” she said. “It was very important to me to know exactly how it happened and what they were doing in its wake. And they answered. I looked over everything. I then asked that my story with this line be about a positive message to empower others.”

H&M said it completely respect’s Carter’s opinion and her response, adding that since the sweater incident, the company has “listened to feedback and taken many steps to be a more inclusive and diverse workplace and brand.”

Over the past two years, H&M has hired Ezinne Kwubiri as its inaugural head of inclusion and diversity. The company also instituted an unconscious bias training program for its workforce and created a multicultural employee resource group known as the Collective.

The company also worked with Carter to create a scholarship program at Hampton University, a history black college that is also her alma mater.

“Only then was I satisfied with H&M’s apology and show of remorse,” Carter said. “For me, the positive outcome is that through incidents like these, we can step closer to a universal language and positive imagery that inspires our children.”

CNN.com – RSS Channel – HP Hero The Pacific Island nations of Tonga, Samoa and Kiribati were the first to see in the new year — when it was still 5 a.m. on December 31 on the East Coast of the United States and 11 a.m. UTC (Coordinated Universal Time, the global standard). New Zealand […]

Top EU official says Brexit is a ‘wound’ for the bloc

CNN.com – RSS Channel – HP Hero European Parliament President David Sassoli told CNN he was concerned about the UK government’s decision to rule out an extension to the Brexit transition period, which starts on Friday and ends in December 2020. EU laws and free trade between the two will continue throughout the 11-month transition […]

CNN.com – RSS Channel – HP Hero The women, identified in the lawsuit as Jane Doe 3 and Jane Doe 4, join an existing lawsuit filed in August that included the accounts of two women, Jane Doe 1 and Jane Doe 2, who were suing for alleged sexual battery. The lawsuit also lists nine other […]