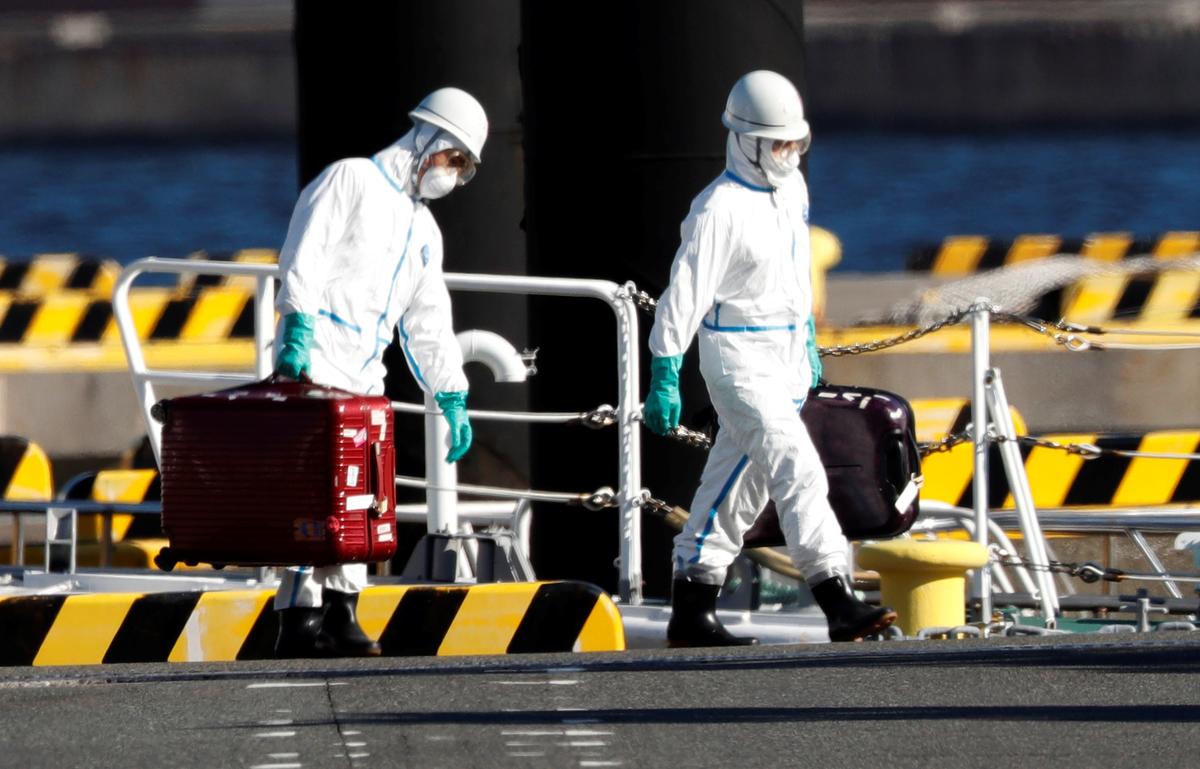 Officers in protective gears carry luggage cases after people who were transferred from cruise ship Diamond Princess, arrive at a maritime police’s base in Yokohama, south of Tokyo, Japan February 5, 2020. REUTERS/Kim Kyung-Hoon

TOKYO (Reuters) – Japan’s military prepared a chartered ferry on Wednesday to use as a quarantine ship that could house hundreds of suspected coronavirus cases as the number of infected people in the country rises.

The 17,000 ton Hakuo was docked at the Yokosuka naval base near Tokyo, which is also the home port of the U.S. Navy’s Ronald Reagan carrier. If put into service, the ship will initially take up to 94 people, but can accommodate more.

“Around 300 people could comfortably live on the ship and it has a maximum capacity for 500, although that would mean queues for the baths and other facilities,” a Japan Self Defense Force official told Reuters.

Preparations aboard the Hakuo come as health authorities placed more than 3,500 people on two weeks quarantine on a cruise liner anchored off Japan after health officials confirmed that 10 people on the ship had tested positive for coronavirus and more cases were possible.

Japan’s government has come in for criticism that it has been too slow to respond to the health crisis. Unlike other countries, Japan has not yet forcibly quarantined people who may carry the coronavirus, including Japanese returning on evacuation flights from Wuhan in central China where the epidemic began.

Japan has 33 confirmed coronavirus cases so far, including 17 people who had been in Wuhan and the 10 on the cruise liner.

Since Saturday, Japan has refused entry to foreigners who have been in Hubei province, where Wuhan is located, and may widen the ban to other parts of China.

People quarantined aboard the Hakuo will be confined to quarters for around 10 days and provided with a tablet computer and Wifi to help them pass the time, the Japanese defense official said. Each will be provided with toiletries and other necessities during their stay, with meals brought to their rooms, he added.

Reuters: Top News The following is a list of international sports events affected by a coronavirus outbreak, which has killed more than 2,200 people and infected more than 75,000 in China after emerging late last year in Wuhan, Hubei province. February 21, 2020 at 01:14PM