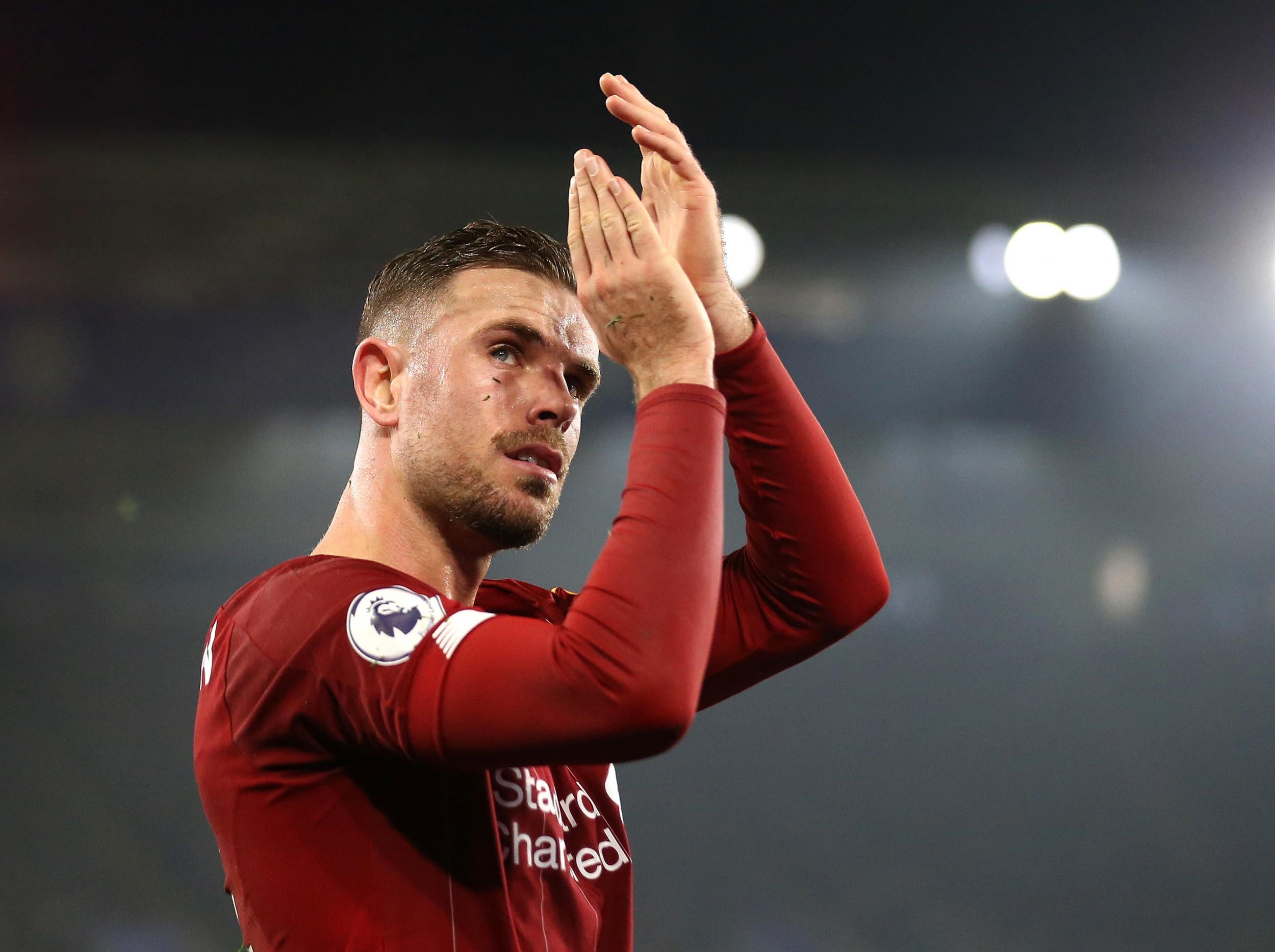 It has not been easy for Jordan Henderson. The Liverpool captain has frequently faced an uphill battle at Anfield to win the approval of managers, owners and some supporters. His efforts have often been unappreciated. The mood has now turned.

Henderson is being punted up to win the footballer of the year award. Last month the 29-year-old was named England player of 2019. The midfielder is pragmatic on the pitch. He habitually subverts his own game for the good of the team. This means his contribution has been overlooked by some.

Right from the beginning there was a misapprehension about why Henderson was signed from Sunderland for £20 million nine years ago despite internal opposition at Anfield. The simplistic viewpoint is that he was bought to replace Steven Gerrard, whose career was slowly on the wane in 2011. No one, least of all Kenny Dalglish, the manager at the time, was foolish enough to believe that anyone could take the place of the Kop legend. The team needed to be completely restructured in the post-Gerrard world. There were more unsettling developments for Henderson in the four years before Liverpool’s talisman eventually left Anfield.

Brendan Rodgers replaced Dalglish less than 12 months into Henderson’s career. The regime change threatened the midfielder’s position with the club. In the ‘Being Liverpool’ documentary series, Rodgers addressed the squad brandishing three envelopes. In each, the Northern Irishman said, was the name of a player who “would let the team down.” It is a common – if trite – motivational ploy. The message is simple: do not be the person in the envelope.

Rodgers has since said there were no names written down. If the manager had anyone in mind, though, it is a fair bet that Henderson was among them – along with Luis Enrique and Stewart Downing.

Senior Anfield sources listed Henderson as one of the players that Rodgers had “no interest in.” That antipathy reflected the mood of Fenway Sports Group (FSG), the owners, who were suspicious of the signing from the start and whose doubts about Henderson persisted well into the Jurgen Klopp era.

In Rodgers’ first transfer window he offered Henderson to Fulham as part of a deal to bring 29-year-old Clint Dempsey to Merseyside. The 21-year-old refused to go to Craven Cottage. The episode was shambolic, undermined FSG’s public commitment to youth and placed Henderson in an invidious position. It is testament to his strength of character that he continued to put every effort into securing his position at the club.

Rodgers then found that Henderson was reliable – unlike many of the players arriving at Anfield during the era of the infamous transfer committee. He would put in a shift and perform whatever role asked of him. In 2012-13, almost half of his 30 Premier League appearances were as a substitute. The next season he was not named on the bench once. He would have been an ever-present if he had not picked up a ban for violent conduct after poleaxing Samir Nasri in the 3-2 win over Manchester City.

The suspension meant Henderson missed three of the last four games in the battle for the Premier League trophy. There is a compelling argument that Gerrard’s slip against Chelsea was not the determining moment in the 2013-14 title race. The real reason Liverpool’s lead at the top ebbed away was Henderson’s absence at such a vital moment.

Despite this, a significant proportion of the crowd at Anfield – and the legions of armchair followers – have remained critical of Henderson’s performances. They do not see value in his workrate, leadership abilities or his willingness to help out team-mates. Some of his best work is off camera and away from the ball. Complaints about his lack of goals and creativity have lingered and some have been critical of his eagerness to retain possession with sideways passes. Even in the waning days of the Rodgers era, the suggestion from the highest level at FSG was that they would offload Henderson without a moment’s thought if they could, even though he was playing through pain with a heel injury.

Klopp recognised his value immediately. For the German’s team to flourish they need men who are prepared to do the dirty work. Henderson has never shirked this role.

In the past year, as Trent Alexander-Arnold and Andy Robertson have become the greatest source of deep threat from Liverpool, Henderson has been able to show the more creative side of his game. His passing range has been on display and he has scored as many league goals so far – three – as in the previous three campaigns. Fabinho’s presence in the team has given the captain more licence to play. The accusations that he was a “crab,” forever playing safe balls, have even less justification now.

The player of the year awards will probably go to men who catch the eye more easily. Alexander-Arnold must be a frontrunner and Vigil van Dijk’s stature makes him an easy option for voters. Alisson Becker has arguably been the most significant performer this year and although goalkeepers do not win individual prizes, the Brazilian deserves a shout.

Henderson does, too. He deserves all the praise he gets for his role in Klopp’s all-conquering team. And perhaps some extra love for all those years at Anfield when he was underappreciated.

Liverpool vs Everton prediction: How will FA Cup third round tie play out?

The Independent Liverpool take on Merseyside rivals Everton at Anfield in the standout tie of the FA Cup third round. Jurgen Klopp’s side defeated Sheffield United on Thursday to take their lead at the top of the Premier League table to 13 points with a game in hand. It was only a month ago that this […]

The Independent Boris Johnson will meet the leaders of Northern Ireland‘s restored power-sharing executive on a visit to Belfast on Monday. The prime minister will hold talks with first minister Arlene Foster and Sinn Fein deputy first minister Michelle O’Neill at Stormont. His visit comes in the wake of the landmark deal, tabled by the UK and […]

The Independent More than 150 people have sought compensation after claiming they were dismissed from Britain’s armed forces because of their sexuality, The Independent can reveal. But a leading LGBT+ campaigner has said the number of people sacked in this way was “likely to run into thousands” and that the Ministry of Defence (MoD) should proactively […]